I broke my cock over this chick. 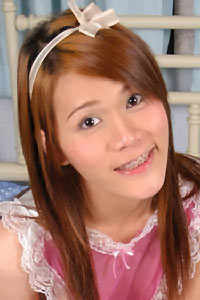 This little bit of sheer tranny delight comes to us from AsianTS. If you don’t have a membership there, I’d strongly recommend getting one. It’s chock full of little honeys like this one.

And what a honey she is, too. AsianTS says she plans to get a cockchop as soon as she has the funds. I think such a thing should be against the law. Because if you like tranny schoolgirls as much as I do, this sweetie is very close to perfection.

I’m pretty sure she knows it too, the way she has dolled herself up for this shoot. From the ribbon in her hair to the tips of her fishnet covered toes, she oozes a mix of innocence and seduction that made me blow load after load. The first pic was almost enough to do it, but when the little tranny harlot teased in the second shot, I was a goner. See how she splays those thin tranny thighs open, and juts her hips upwards? She knows we want to see what is in those sheer pink panties.

She eventually shows us, just like a good girl, and for such a slender ladyboy, she’s packing a rod. I’d like to rub my cock head over her cock head. Instead of dueling banjos, we could play dueling tunes of an entirely different nature!

If you wanna see more of this tranny schoolgirl, go login to AsianTS.